It has proud privilege of having produced so many brilliant scientists/ teachers/ administrators who have been heading several repute institutions / departments / universities / organizations of the country and serving the science of Plant Pathology. To name a few are Drs. Y. L. Nene, R. S. Singh, Kishan Singh. Akhtar Hussain, K. D. Parahia, B. B. Nagiach, Amerika Singh, D. V. Singh, Sita Ram Misra, R. P. Singh and Ram Nath, who became Vice Chancellor of the university and Dr. R. P. Singh is serving as Virologist in Research Station, Frediction, Canada. Alumni of the Department become stalwarts nationally and internationally

The department has proud of having produced many brilliant students who had/have been heading top institutions / departments/ universities of the country and serving the science of plant pathology. To name a few are following:

The research activities in the department are being carried out through various units viz., Bio Control Lab, Phyto- bacteriology, Plant Virology, Plant Pathology, Mycology, Seed Pathology and Nematology for finding out better and more effective eco-friendly management strategies against the disease of agricultural crops caused by plant pathogens.

B. New chemicals and other eco-friendly methods are also screened regularly for their effectiveness in the management of plant disease caused by fungi, bacteria, viruses and nematodes.

Pure Trichoderma spores found to be most effective in maintaining spore viability thereby increasing the shelf life. Formulation prepared by this method has given shelf life 2X 1012 even after 16 months and is cost-effective, which is a new finding. These spores when applied in field trial, given substantial amount of disease suppression and many fold increase in yield over control. These pure spores having better shelf life are potential and effective for longer survival and better growth. Pure spore harvesting methodology applied for patent. 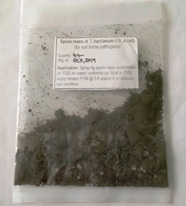 Molecular identification of ITS and tef markers were done with eighteen Trichoderma species, their submissions to National and International Data Bank were given below:

Trichoderma Library was created for the first time with all possible parameters including production of secondary metabolites for identification and future reference of Trichoderma sp. and has put on University website- http://www.csauk.ac.in/nae.html 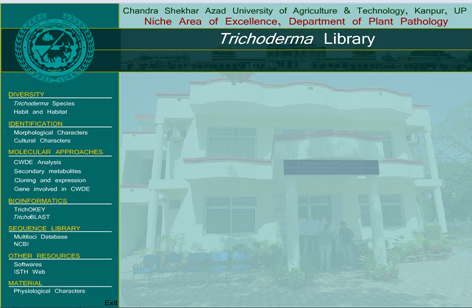 Video on Trichoderma Production Technology on You Tube

A video entitled “Trichoderma Production Technology (Th. Azad) developedunder ICAR NAE Programme” uploaded on YouTube in August 2015 for the first time for farmers to learn the technology for the preparation of bioformulations. https://www.youtube.com/ Trichoderma Production Technology (Th. Azad) developed under ICAR NAE Programme (more than 1.14 lakh viewers to till date). 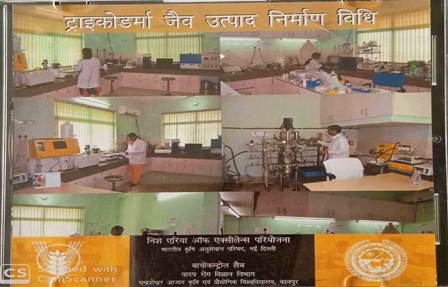 Scientific /technical Books written by Faculty Members in the Department 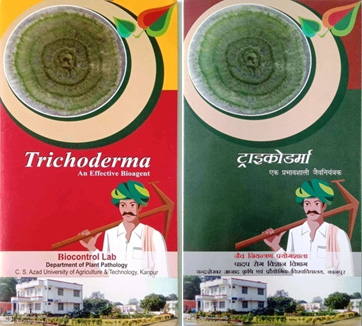 The following extension activities were undertaken by this department in and outside of the college campus in coordination with the other extension workers, workers/ officials of the University and field staff.

Training to the Cultivators and field staff

The specialists of Plant Pathology and Extension Pathologist have actively participated and took active part in all the farmers day and kisan gosthi organized by University at Daleep Nagar, Raibareli, Fatehpur, Lakhimpur khiri, Hardoi, Firozabad, Aligrah, Mainpuri, Farukhabad, Kasganj and Etawah in Rabi and Kharif seasons. Training regarding identification of fungal, bacterial, viral and nematode diseases of crop plants and practical methods of control had also been given at Block Levels in Kanpur district. Such training and demonstrations were also given to students and farmers during N.S.S. campus organized in Kanpur district. The importance of plant diseases and their control was displayed through live disease specimens, charts, photographs and posters in Agricultural Exhibitions at Kanpur and other places for the benefit of cultivators. Pamphlets covering technical information on plant diseases and their control were also distributed to the cultivators at such occasions Extension workers and development staff visiting this University under in-service programme had also been given practical training in plant diseases and their control in this department.

Routine surveys were conducted in farmer’s field for recording the development of different plant diseases. Vigilance was also kept on the appearance of newer diseases. Cultivators were guided for taking up timely control measures against the diseases.

The department continued the programme for the promotion of cultivation of edible mushrooms among urban and rural population by imparting training and supplying spawn material through Mushroom Research and Development Centre. The details have been given below.

Every month one week training on Mushroom cultivation technology was organized for farmers, employed youths, entrepreneurs. Consequently the awareness and the production of mushroom in and around Kanpur city and other cities of U.P. are increasing successfully.

Literature on mushroom cultivation and important plant diseases together with their control were distributed to the visitors. Dr. S. K. Biswas Professor has been serving as Master Trainer.

The department runs the programme for the production, supply and training programme for farmer and government agencies through Bio Control Lab Unit established in Department of Plant Pathology.

On Going and Completed Schemes/Projects

Organ gram of the Department of Plant Pathology (Officer and Employee)